Fresh from the drawing table... Zombie!

I have for you today another drawing that is fresh from the drawing table. This time around it is a Zombie! We have finally reached the end of the alphabet and that means two things, the letter "Z" and that there is only one monster to choose from. Nice to see the alphabet and the Monster Manual made reaching the end fun. I present to you my version of the walking undead nightmare favorite we all love, the Zombie... 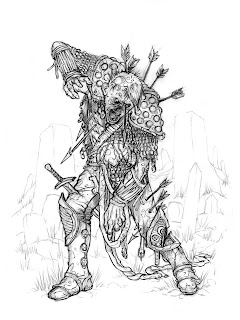 There is not a more fitting reward for an honorable death in game then to have your character's corpse animated by magic and used as a weapon against your surviving teammates. No contagion, no bite, no experimental vaccine, only the most powerful of dark magics and the never ending stockpile of ready corpses that a high fantasy world seems to be able to supply. These undead horrors do not crave the flesh of the living, but only to do the bidding of their masters. I had way too much fun posing for and then working on this drawing. Even more so then the Yeti, there is not a lot of need to remake the wheel on this monster. I could have done something really out there... but that would, to me at least, be untrue to the core nature of the Zombie, an animated corpse. I always imagined that the D&D Zombies being able to take a ridiculously large amount of damage before ceasing to function. They keep walking and fighting until the body is so severely damaged that the magic that binds them fails. Much like Kobolds, I really like Zombies as a go to monster, hard to go wrong with them in an encounter or a drawing!

So now what? 26 drawings for 26 letters, that means I have 26 paintings to do! In the mean time I will most likely go back to A and start over again. Still plenty more monsters just waiting to be drawing!

That is all for today, see you back here on Wednesday! Until then...


For more samples of my work or to contact me regarding my availability head over to my website: www.christopherburdett.com
Posted by Christopher Burdett at 7:51 AM