I have for you another drawing that is fresh from the drawing table. This time around it is a Bear (Cave). The mundane monster of the letter "B" continue with another bear! There are three bears in the original Dungeons & Dragons Monster Manual and today I have the last one, the Cave Bear.  I present to you my version of a Bear (Cave)… 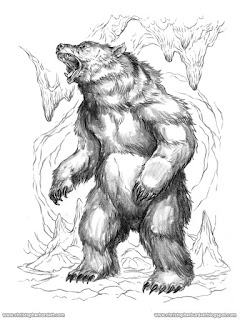 The Cave Bear is the most monstrous of the bears in the Monster Manual, especially compared to its Brown Bear and Black Bear cousins. It helps to be a giant prehistoric holdover that is perfectly designed to eat the thief and the wizard of the adventuring party while the fighter is stuck in a Gelatinous Cube. Not that I would ever do such a thing to my players. No, they ended up with two Cave Bears and some crazed bats. Anyway, the Cave Bear is better at filling the role of a monster, but it still is a rather mundane beast. Take pity on this monster the next time you encounter it in its lair, it might simply be protecting its home and its mate and will not offer up any XP or treasure. Of course, if they attack first, the blood lust oath of all player characters demands a sacrifice...