Fresh from the drawing table... Salamander!

I have for you another drawing that is fresh from the drawing table. This time around it is a SALAMANDER! "S" is still full of monster goodness so it is hard to just pick just one. This time around a creature from the elemental plain of fire is the winner. I was itching to work on something more monstrous and the Salamander hit the mark exactly! I present to you my version of a Salamander… 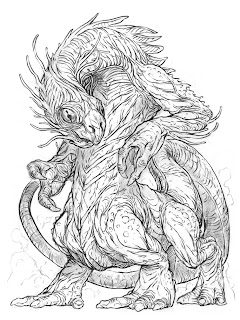 When I say Salamander the first thing that may come to mind is the small amphibian that like streams, rocks and moss.... not a huge monster that love to be bathed in fire. There is a whole crazy mythology built up around the actual real world salamander that says they are in fact fire proof and love fire. I am sure a lot of this come from salamanders being in fire wood unbeknownst to the human tending the fire and when the little salamanders feel the heat they try to escape and come tumbling out of a fire more or less intact... and of course the ONLY explanation is that the salamander live in fire. Silly humans. Even Leonardo da Vinci believed and propagated these ideas... seriously, look it up... you need to know about your monsters.


For more samples of my work or to contact me regarding my availability head over to my website: www.christopherburdett.com
Posted by Christopher Burdett at 8:44 AM