Today's piece of spot art is the Sceffe Goddess of Death and Rebirth Bell. This relates to the Belled Kreep section of the book, and Reginald and Ethra will make mention of it. I can not say too much more without giving some things away so I will leave it at that. 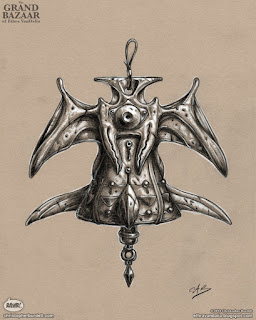 Here are all of the environmental pieces appearing in the first volume of The Grand Bazaar of Ethra VanDalia: Air Shops, Busy Streets, Hollow Alley, Keeper of the Clocks, Sunken Stalls, The Grand Bazaar, The Seated Dead,

That is all for another exciting Wednesday on the blog, see you back here in a couple of weeks, I am going on vacation! Until then...

For more samples of my work or to contact me regarding my availability head over to my website: www.christopherburdett.com
Posted by Christopher Burdett at 9:30 AM No comments:

You may have heard by now that we lost Peter Mayhew earlier this week. For most of us, Peter is interchangeable with the character he brought to life in Star Wars, Chewbacca. It is fair to say that Chewbacca is Peter Mayhew and Peter Mayhew is Chewbacca. I had the wonderful opportunity to meet Peter several times over the years. The first being when I worked at a comic shop in the early/mid-90s. Back then you could have actors from Star Wars come to your shop to do appearances and signings. I, of course, got my Chewbacca figure signed. Back then the signatures were free. Peter was quick with a story and a kind word. I don't often meet people that are taller than me, but Peter was a full foot taller than me, and it was quite the experience to be around someone so large. It was easy to see why Wookiees are so formidable. In the years since then, Peter has been a guest at various events I was working or was a guest at myself. He remained a singular figure until the end.

Since becoming an artist, I had the opportunity to illustrate Chewbacca twice for the Fantasy Flight Star Wars games. It meant a lot for me to take on the challenge of painting Chewie since he holds a special place in our household. I did all that I could to capture Peter and Chewie in my paintings. In the end, I think the second painting was a better likeness, but who am I so say. It was an honor to paint Chewbacca, and I hope I did the character justice.

We lost a legend this week, but we did not loose Chewbacca. He will always be with us, no one is ever really gone. Joonas Suotamo has picked up the torch and has been doing a great job filling Chewies shoes.

Here are the two illustrations of Chewbacca that I created for the Fantasy Flight games. 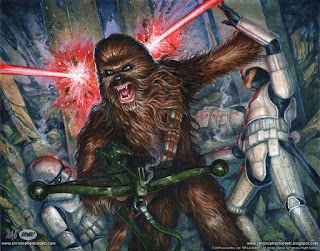 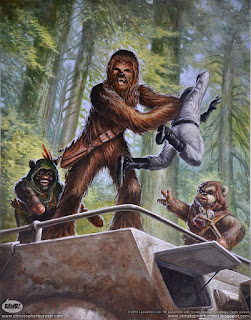 That's all for another exciting week on the blog, see you back here next week! Until then...


For more samples of my work or to contact me regarding my availability head over to my website: www.christopherburdett.com
Posted by Christopher Burdett at 9:30 AM No comments:

File this under better late than never. Last week I finally shared the process that went into making the Festering Mummy painting for Magic the Gathering. Today I have for you the Art of Amonkhet Book that features the Festering Mummy. This came out in 2017 if I remember correctly, and of course, now that we are approaching mid-2019 I am sharing it. This is the second Art of Magic the Gathering I have had my work featured in. It is a gorgeous book filled with beautiful art, and I highly recommend anyone interested in seeing Magic art printed larger than a trading card to pick one up. Enough of my yammering, here are some images related to all of this. 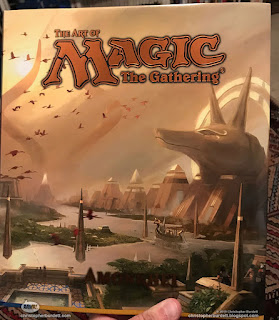 The Art of Magic the Gathering - Amonkhet 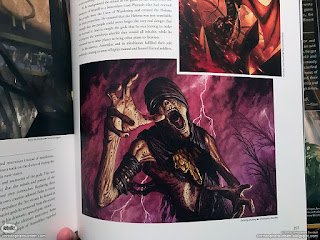 Here again is the full art for the Festering Mummy in all its mummy glory, one last time. 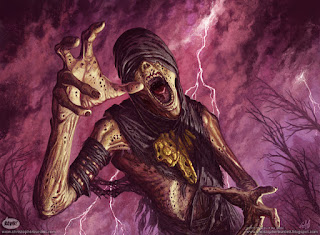 That is all for another Wednesday on the blog, see you back here on Friday! Until then...

For more samples of my work or to contact me regarding my availability head over to my website: www.christopherburdett.com
Posted by Christopher Burdett at 9:36 AM No comments: