Fresh from the drawing table... Vampire!

I have for you today another drawing that is fresh from the drawing table. This time around it is a Vampire! "V" had but one monster listing, so the decision was rather easy. The only hurdle for this monster was my rather strong dislike for the contemporary incarnation of the Vampire. I pressed on and came up with a monster more of my liking. I present to you my version of a Vampire... 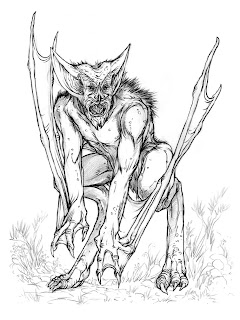 Vampires are not pretty. Vampires do not sparkle. Vampires are MONSTERS. Vampires are extremely powerful but their power is balanced by their weaknesses. Being a Vampire is not a treat or something to strive for. Did I mention that whole part about them being monsters?

Moving on... I wanted to catch this particular Vampire in the process of changing back into it's human guise after landing in bat form. Basically, image him saying, "SKREEEEEEEE!" and you will have the whole experience. I was really torn in how extreme to make his monstrous form, looking at this again I wonder if I erred on the said of caution. That can always be fixed later. I will leave you with the reminder that Vampires are monsters... MONSTERS!

That is all for today on the blog, see you back here on Wednesday! Until then...


For more samples of my work or to contact me regarding my availability head over to my website: www.christopherburdett.com
Posted by Christopher Burdett at 7:52 AM