Fresh from the drawing table... Kobold!

I have for you today another drawing that is fresh from the drawing table. This time around it is a Kobold! "K" offered only two options but one was without a doubt a perfect choice. Kobolds are one of my favorite D&D creatures and it was a real pleasure (and a bit stressful) to get to "K". I present to you my version of a Kobold... 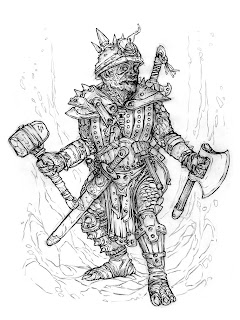 Having had to illustrate the official Dungeons & Dragons Kobold I had a lot of trouble to see this creature in a new and fresh light. Everything I was coming up with seemed wrong since I had spent so much time making sure I followed the D&D style guide. I decided to turn to the Kobold's Germanic origins for inspiration. Turns out the original Kobold was described as a small little person that could be helpful or harmful. There were three different types, the House Kobold, the Cave Kobold and the Sea Kobold. I zeroed in on the Cave Kobold since they were described as a more ugly monstrous creature and were know for their evil actions. The cobalt family or minerals got their name from the Kobold since it was thought that the creatures contaminated ore with the poisonous cobalt.

With all this in mind I went forward with my Kobold and envisioned them as stunted ugly lumpy men that scavenged the tunnels and caves of the land looking for resources and unfortunate victims. They would take anything and everything from fallen prey, so they soon became loaded down with the gear of adventures as well as their own. They particularly like to go after Dwarfs since their gear was a better size for use.

That is all for today. I will most likely have another drawing for you on Friday as I look ahead to Illuxcon next week. Still a lot to do and prepare, but more on that soon! Until then...


For more samples of my work or to contact me regarding my availability head over to my website: www.christopherburdett.com
Posted by Christopher Burdett at 8:52 AM