Fresh from the drawing table... Dragon!

I have for you today another drawing that is fresh from the drawing table. This time around it is a Dragon! There are not many other creatures as iconic and legendary as dragons. So with much trepidation I decided to give it a go and give this creature a pass as seen through my eyes and sensibilities. 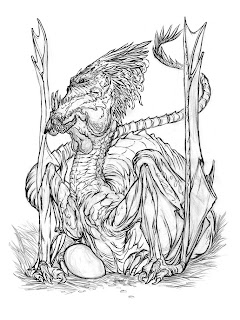 Isn't she a good mother! I will say that I have been less interested in approaching the dragon compared to the other so far. There is just so much baggage, lore and expectations heaped on the dragon that it can be a little overwhelming. I have been squeezing in a little work time on this one here and there for a while now and it is finally done. I am looking forward to getting to work on the next drawing... but you will have to wait till I post it!

To give you fair warning, this might be the only post from me this week. Much is going on and I have to draw the line somewhere. If anything major comes up this week I will be sure to post it as well if things ease up at all I will be sure to post something. Hopefully I will be back on schedule soon with loads of neat things to share! Sorry for the inconvenience...


For more samples of my work or to contact me regarding my availability head over to my website: www.christopherburdett.com
Posted by Christopher Burdett at 8:46 AM