I have for you another drawing that is fresh from the drawing table. This time around it is a Boar (Wild). The mundane monster of the letter "B" continue with another boar! There are three boars in the original Dungeons & Dragons Monster Manual and today I have the second one, the Wild Boar. I present to you my version of a Boar (Wild)… 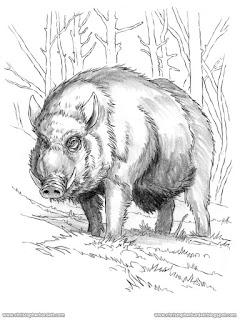 The wild and formidable bacon monster. As eager to eat you as you are to eat it. Given the chance a bacon monster will eat you whole. I sometimes think that the mundane monsters of the original Dungeons & Dragons Monster Manual are in there to allow the Dungeon Master to be master world builders or complete jerks. Did your party run out of food or wants to work on a particular skill like tracking? Throw in some Wild Boar to make things interesting and interactive. The DM and party tired of that level one wizards that seems way over powered and is wrecking the campaign? Death by boars while isolated from the rest of the party in the woods. ...of course, if you go by 1st Edition game mechanics, a domestic cat from the Monster Manual can kill a level one Wizard. RAWR!