Fresh from the drawing table... Ettin!

I have for you today another drawing that is fresh from the drawing table. This time around it is an Ettin! Two heads are not always better then one, especially when you might be sharing one brain between the two. The Ettin has a lot going for itself though; big, dumb, massively strong and a fondness for club like weapons so I couldn't help but give it some pencil on paper love. 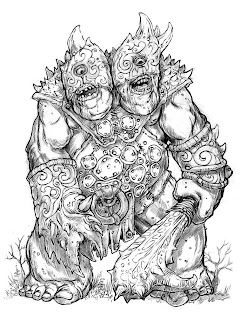 You may have seem me nursing this guy along at Gen Con, he was not being really cooperative at first. This was in fact my third or fourth attempt at the Ettin. I was having a tough time getting all the elements just right. To complicate things I was asked by a client to create an Ettin for them when I was in the early stages of my own. Luckily, I had much better and quicker success with their Ettin then I had at first with mine. It is hard to go wrong with a big hulking bruiser. It only gets complicated when I try to put weird helmets on them.

It is looking like it will be a week of drawing fun on the blog this week. I will see you back here on Wednesday with something else new from the drawing table! Until then...


For more samples of my work or to contact me regarding my availability head over to my website: www.christopherburdett.com
Posted by Christopher Burdett at 8:48 AM