I have for you today another drawing that is fresh from the drawing table. This time around it is a Purple Worm! "P" offered up several monster to choose from but it became clear rather quickly there were only two real options. Though I had my eye on the Peryton for a long while I knew when it came down to it my heart was set on something much larger and much more... uh, PURPLE. I present to you my version of an Purple Worm... 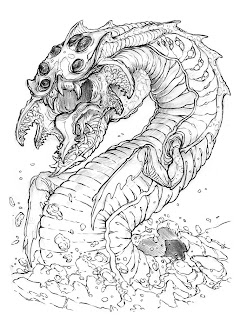 While I was still working in Los Angles I worked on some concept designs for a fantasy epic starring Rob Schneider. Needless to say the project has yet to go anywhere after many years and I am still haunted by the giant wormy snake dragon monsters I designed for it. I exercised some of those ghost in the Crypt Worm I designed for Dreamblade. I think I may have gotten some more out with this Purple Worm. The biggest two problems with a worm monster is that a worm in and of themselves are not very threatening and there are the brilliant Dune sand worms that you are trying to avoid coping. I feel my take on this has become more of a Purple Wyrm, given his little slashing arms and more interesting mouth, tongue, head area. Since I am doing these for myself I can get away with those kind of changes. It is still a giant horror from deep beneath the earth that can devour a player whole!

That is all for today, see you back here on Friday! Until then...


For more samples of my work or to contact me regarding my availability head over to my website: www.christopherburdett.com
Posted by Christopher Burdett at 8:52 AM