I have for you another drawing that is fresh from the drawing table. This time around it is a Blink Dog! This week I have for you the final three "B" monsters that appear in the original D&D Monster Manual! First up this week is a crazy canine monster that has issues with its local in space and time. I present to you my version of a Blink Dog… 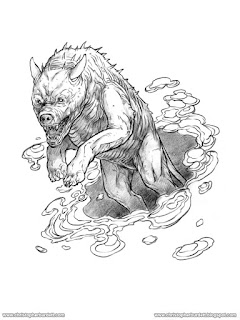 What's this? A dog that is here, there, and everywhere all at the same time? A mortal enemy of the kitty cat Displacer Beast? What cantankerous and kooky conundrums can this canine create? Who knows... it is just a dog monster with location issues. I suspect that these things were touched by the Elder Gods and simply are not meant to exist on our plane of reality any more, but just have not figured out how to stay there yet. The Blink Dog was always one of those monsters I never really thought about. ..until now. I REALLY wanted to give them tentacles, but I thought it would confuse things when I was working on "D" and finally created my version of the Displacer Beast.