I have for you another drawing that is fresh from the drawing table. This time around it is a Beetle (Giant) - Stag! With the completion of the Giant Water Beetle I am now half way through the giant beetles of the original D&D Monster Manual. This has turned out to be one, if not the favorite designs that I have worked up for the giant beetles. I present to you my version of a Beetle (Giant) - Stag… 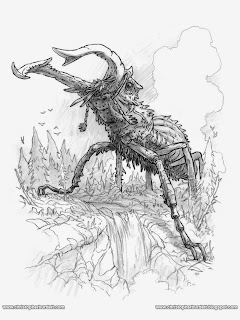 Those mad wizards and their animal experimentation need to be stopped. Look at what they have done now! What possible good could this do the Realms? Most likely there was a powerful, but paranoid ruler who didn't trust their neighbors to the east and so Elwerk the Everseeing was enlisted to create a weapon to deter any attack. Elwerk creates a mighty weapon that of course goes out of control and before Elwerk could do anything to stop his weapon he is killed. The weapon proceeds to destroy the entire kingdom it was made to protect as it lays to waste everything around it. Eventually this weapon wonders off into the wilderness where it most dies from the strain of being a HUGE magically deformed beetle. While many woodland creatures will have plenty to eat from the carcass the residual magical effects will lead to temporary giant growth in all other animals that come in contact with it... a horrible chain of events. Thanks, Elwerk! Wizards... the bane of the Realms.