Fresh from the drawing table... Hydra!

First, I would like to thank everyone that purchased my shirt on Wednesday! I didn't know what to expect for my first shirt sale and it was all very exciting. Hopefully there will be more in the future!

I have for you today another drawing that is fresh from the drawing table. This time around it is a Hydra! It seemed like the obvious pick when I got to "H", but I do need to keep an open mind when it comes to picking monsters to draw. In the end I stuck with the the first choice, so I present to you my version of a Hydra... 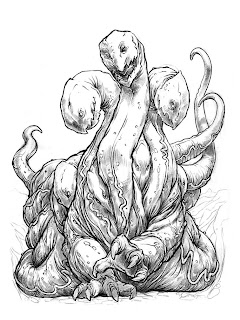 Is it a plant? Is it an animal? Is it some horrible combination? Who knows, all I know it is growing heads like there is no tomorrow. Cut off one and there are two more waiting. It drags it's huge coiled mass around eating and growing new heads. Maybe fire will work on it?

DON'T FORGET! Videocon is next Thursday! All the details can be found HERE!

That is all for another exciting week! I will have some surprises for you next week and of course coverage of Videocon! Until then...


For more samples of my work or to contact me regarding my availability head over to my website: www.christopherburdett.com
Posted by Christopher Burdett at 9:17 AM