Today I have for you the closest thing that there will likely be a miniature of myself. I illustrated the Eidolon for Mordenkainen's Tome of Foes. If you are unfamiliar with the origins of this particular creature, you must only look back to the original Player's Handbook to see a giant statue holding a brazier that it losing one of its jeweled eyes. At some point, that statue got fed up and decided to toss the brazier down and seek its revenge. That was where I came in and my painting. 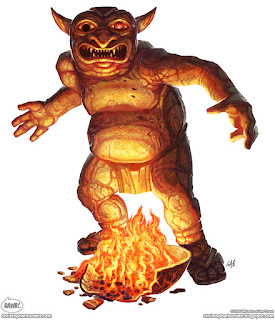 11 x 14 - Digital
Art Director - Kate Irwin
© 2018 Wizards of the Coast LLC
In the past, I have talked about my surprise that some of the monsters that I have designed and painted were turned into miniatures. This particular one seemed like it could eventually end up as a miniature, and I am happy to see that it did sooner rather than later. As I have mentioned many times here on the blog that I use myself for nearly all reference required for my monsters, this makes this particular mini the nearest I will come to be cast in plastic. Not that this is in any way a direct self-portrait, there are physical tells in the pose and posture that have carried over to the mini that I see as being me. It's the little things. Here are some images of the final production miniature of the Eidolon. 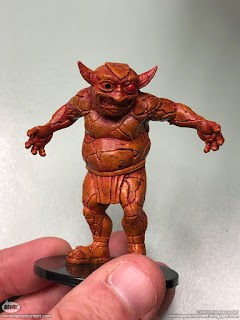 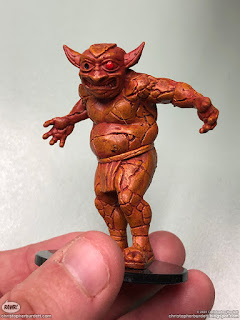 Eidolon Miniature
That's all for another exciting week on the blog, see you back here next week. Until then...
For more samples of my work or to contact me regarding my availability head over to my website: www.christopherburdett.com
Posted by Christopher Burdett at 9:30 AM