As The Grand Bazaar of Ethra VanDalia begins to appear in the wild, it is time to get my house in order. For the past several years, I have used a large corkboard as my primary means of organizing and assessing the progress of my book. In addition to lists, notes, and outlines both digital and analog, this production board kept me going and was a visual reminder that I was making a book, even when it didn't feel like it. The take away that has stuck with me more than anything from my time at Rebecca Guay's Illustration Master Class was that making a book is impossible. You can not sit down and make a book, it just can't be done. BUT, you can make a drawing, work on an outline, write a few paragraphs, finish an illustration, edit what has been written, working on sketches for another illustration. In time, if you keep at it, you will have a book. So that is what I did. And after several years and a lot of work, with the help of some fantastic people, I made a book.

With the book now released, it is finally time to clear off the corkboard and make a fresh start on it with the work that is already happening on the next two books. The pandemic has had its effects on my ability to work, but I need to start making an effort if these books are to happen. So, to that end, I cleared off the production board last night. Here is how it has looked for the past several months as the books were being produced. 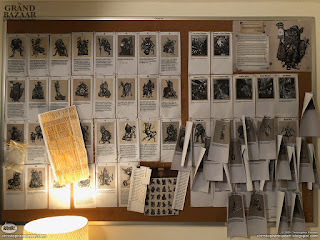 Production board August 2020 - the ending

As a side note, here is the production board in February 2017 when I first put it up. It was overdue when I got it and instantly helped me visualize where I was at in production and what still lay ahead of me. It is crazy how much has happened in the past three and a half years. Hopefully, in that amount of time, or less, we will see another journey to the Grand Bazaar. 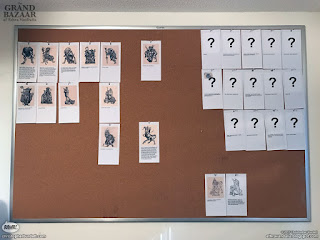 Here is an image of how the production board now looks—Ready for the beginning of another adventure. I will be getting the sheets and notes up that are in production and what needs to be made. I have a list of the main art assets for the next book ready to go, it is now time to get all my duck lined up and in a row. 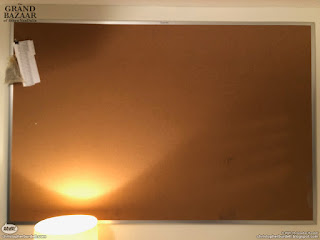 Production board August 2020 - the beginning

I have kept some of the items from the production board. Some are sentimental items, some might interest collectors, and others might be fun to give away as artifacts of the production of the book. We shall see, for now, the items I am keeping are in my flat file. The rest, well, they were quickly claimed by another. 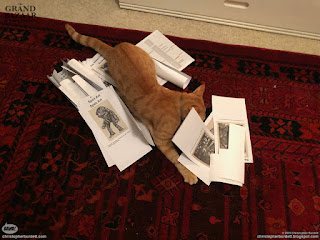 Mietze immediately claimed the notes and items that were less interesting, and I decided to not keep.

That's all for another exciting week on the blog, see you back here on Monday! Until then...