The Daruma That Did Its Job

The most excellent Kat Birmelin sent me a Daruma about a year and a half ago now if my memory serves me. I had completed the first of the large images for The  Grand Bazaar of Ethra VanDalia, and I had a great deal of work ahead of me, including finishing all of the writing for the book, addressing layout, and everything involved with the Kickstarter. The Daruma could not have come at a better time.

As is the custom, I made a wish or goal - mine was to complete the large illustrations for the book, and I filled in one of the eyes. Once completed with the goal, I was to fill in the second eye. By the time I had finished all of the art, I felt that the Daruma still had some work left to do, so I placed upon it the task of finishing the writing. And then, it was tasked with seeing that the editing, rewrites, and additional art was completed. Then there as the issue of the layout, more editing and updates, more art, and finally getting it all wrapped up for the Kickstarter. Once the Kickstarter was happening, it didn't feel like that the Daruma was done yet, there was still one thing left that it needed to oversee - the production of the book. In the end, after so many months and so much work, it was finally time for my little Daruma to get its second eye. I received a production copy of my book this past Thursday and Thursday night Daruma got its second eye. Here is the Daruma with one and then two eyes. 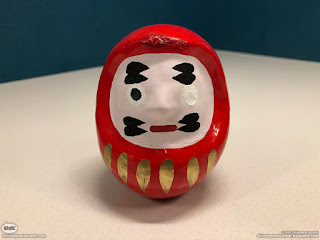 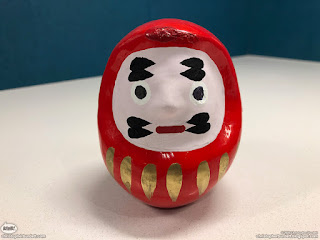 You can see the damage on its forehead, where I had to repaint it after my cat sent it flying one day. It got a nasty crack and needed to be patched up, even though all that the Daruma did its job. It is now in a place of honor on a shelf in our library where it can rest after having done its job. Here is a little video of the Daruma getting its second eye.