Day 3 of Illuxcon V! Today was the big day for me. Everything started off with my talk with Jon Schindehette at noon and I still did not know what to expect. I played it smart and went to bed as early as it is possible at Illuxcon and tried to rest in as long as I could. Several people mentioned to me at the Showcase the night before that they were attending the panel and that they heard it was going to be a packed room. Even though I arrived early there were already folks in the room waiting. As the noon approached the room continued to fill and I was still the only one standing at the front of an ever filling room. A mere 5 minutes late, Jon did finally show up and we got things going (he had a good excuse). I think it all went really well, the crowd seemed to enjoy it and Jon and I had a great time. There were many good questions and the two hours flew by. Unfortunately, I am pretty sure the panel was not recorded, but a dutiful follower of this blog can find a lot of what I talked about here, you just will have to do a bit of searching.

After the lecture I quickly relocated to the main auditorium to listen to Mike Sass, Randy Gallegos, Aaron Miller, Todd Lockwood, and Jim Pavelec talk about things to do to make the illustration industry better. This all centered around things we as artist can do and the repercussions of us not acting. The panel members had a lot of stories of their own lives to share and had many ideas of things to do to move forward. A lot of this centered around a rating website that artist could use to rate and check the rating of various gaming companies to see how they compare of rates and rights. This is still all in the early stages, but it sounds really exciting.

After this group talk I had to quickly move to the workshop I signed up for with Lars Grant-West. It was a workshop centered on creating your alien portrait. Lars shared a lot of excellent animal reference and resources and talked about his process and the things he looks to for inspiration and process. He provided us all with a mirror and we sketched out a rough self portrait and then turned ourselves into an alien or monster. It was a very full three and a half hours of animals, monsters, and drawing. Very glad I took part in it! I hope Lars does something similar next year.

Before I knew it the day was over and I had not been in the main show at all. I will have all day Sunday to take it in, so it all works out. The groups of folks all slit up as usual and went to dinner. The awards and jam sessions started up back at the Ramada in the evening and there was much fun and socializing. I found a comfy chair in the lobby and was surrounded by great and funny folks and the night just flew by. I excused myself very much past my bed time, but it was worth every moment. Here are some images from the day...

As the noon time hour approaches things begin to fill. 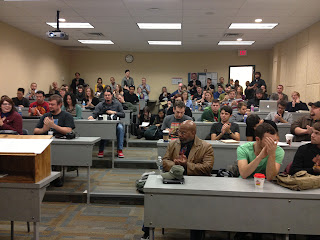 The panel over, there was clapping! Which was, pretty cool to say the least. 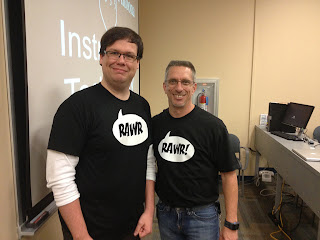 Panel buddies! A HUGE thanks to Jon for taking part and making the panel that much better! 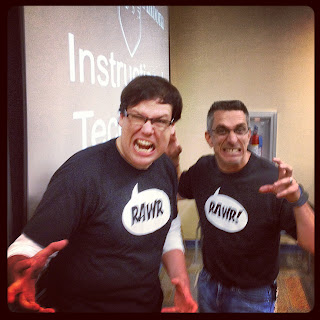 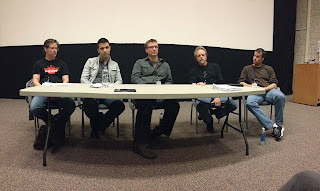 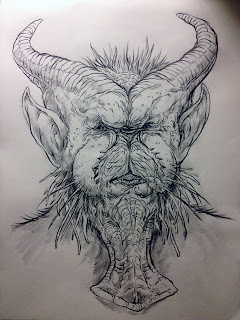 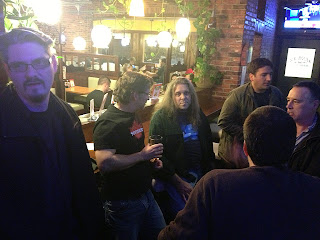 A look at the ballroom during the jam session and after the awards. 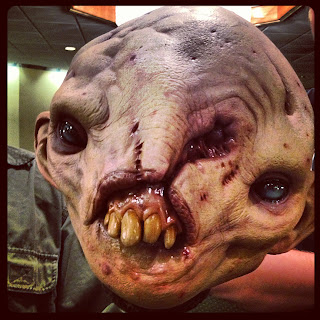 A look at the Ramada grotto from my comfy chair and all the fun and folks. Good times!

That is all for another amazingly awesome day at Illuxcon V! See you back here for a recap of the last day. Until then...


For more samples of my work or to contact me regarding my availability head over to my website: www.christopherburdett.com
Posted by Christopher Burdett at 9:42 AM