The project that will never be... Part 1

While at Gen Con I unexpectedly got permission to share with you the following images that I produced for a project that will never be. I got this permission under the agreement that I can not discuss ANY details about this project... not even the company I produced these for. SO, with that in mind I ask that you not try to guess who or what this was and for whom they were produced. I would hate to have to pull this post down.

Way back in late 2010 (has it really been that long?) I was asked to design some turnarounds and I threw myself into the project and gave it all I had. After an unexpectedly huge set of revisions AND that project eventually getting killed after I had done my part... well, I was a little bummed out. BUT, nearly 3 years later I can now share my efforts on the project that will never be. It did not work out the way I had hoped, but at least now I can share with you all the work I did... 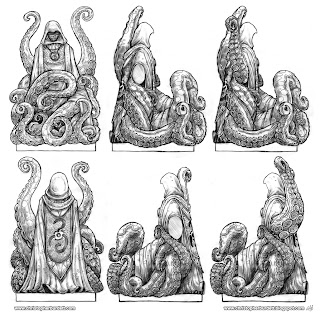 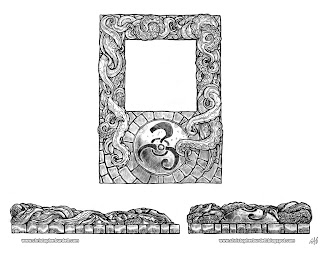 Here are some of the initial concepts that I did for this piece. Now a days I do all my early concepts and thumbnails digitally to save time and to make it easier on myself... not on this project. I was working on paper the entire time. I wanted to make a paper trail for the entire process... a process I almost never got to show off... 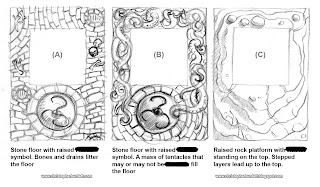 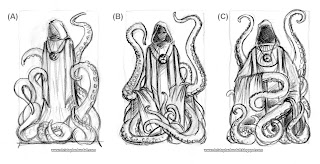 SO... I mentioned an "unexpectedly huge set of revisions" earlier. There some confusion, a miscommunication, a change of plans... something... and after I had produced the figure's turnaround, which as you can see evolved juuuuuuuust a little bit of drawing, I had to start over and redo it all. Apparently I and the client were on two separate pages as far as the piece was going to look in the round. I was of the school of "ALL THE TENTACLES" and they were of the school of "some of the tentacles"... of course the clients wins and I redrew it all. Lesson learned! I introduced a new work flow for these types of projects. Here is how the first version turned out so you can compare and contrast... 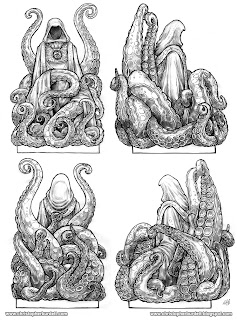 
For more samples of my work or to contact me regarding my availability head over to my website: www.christopherburdett.com
Posted by Christopher Burdett at 9:35 AM