The First Portfolio Leave Behind - circa 2004

I have something a little different for you today. While recently cleaning and organizing the home office, we came upon a relic from the past, well, actually a stack of them. Way back in 2004, while we were still out in Los Angeles, I was trying to expand my career options and was attending events like the San Diego Comic Con to talk with art directors and having interviews with other effects shops in the attempts to find additional freelance work and full-time opportunities. While I had somewhat steady work at the time with the effects shop I moved out there to work with, it was always a feast of famine, and the lean times were hard. Don't get my wrong, I was working on massive shows like Buffy the Vampire Slayer, Angel, and Firefly - not to mention movies and other TV shows. But work was unpredictable, and at the end of the day, it was a hostile work environment, and I was not artistically fulfilled and was looking elsewhere.

To that end, I had a portfolio that contained samples of work. After my review, I would offer a leave behind folder that contained my contact information, resume, and a selection of what I considered the best of my work at the time. Looking back at this now, I would think I would cringe or be embarrassed, but neither has happened. I see in this a beginning. A starting point. And, after sixteen years of hard work, at the end is a career of making monsters for some of the biggest games in the world and a book that I wrote and filled with monsters set in a world that I created.

We all start somewhere. Some of us are ahead of others, and there are those ahead of us. There is luck, happy chances, hard work, sacrifice, and living that will happen, and in the end, we all end up somewhere else from where we began. I like having this object because it is a concrete moment in time for where I was and who I was as an artist. Sure, I would have loved to have been more skilled than I was at that time. I am sure I would have had many more opportunities. But at the end of the day, I was not ready as a person and as an artist. I had not put in my time and hard work. That said, I was about to kick everything into overdrive. A year from when I was handing these out, I was working for Wizards of the Coast, creating miniature turnarounds for Dreamblade. In that year, we left Los Angeles, I started working a steady day job as a designer, and I stopped worrying about trying to appease others and started focusing on my own work. It all changed in June of 2005, but it began in June of 2004 with this leave behind. 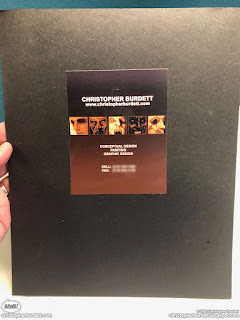 Brown, black, and a little orange... now that screams hire me for my design sense. 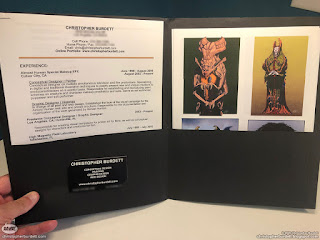 Inside you will find my business card, resume, and a selection of my work. 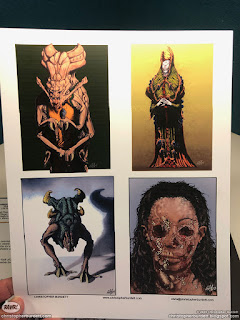 Page one of the art samples. I think they speak for themselves. The bottom left was the one that Carlos Huantes groaned the loudest over when he reviewed my portfolio. 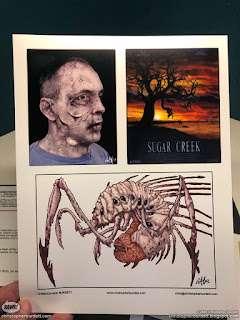 Page two of the art samples. Top right was a movie poster I was working on for the producer/agent and the scriptwriter. I never got paid, and nothing came of this horror western. The bottom design is still one of the favorite things that I did for Buffy/Angel. Production nitpicked the design until it was ruined and then clapped themselves on the back about what I good job they did. I still have the original design, and I am still happy with it. 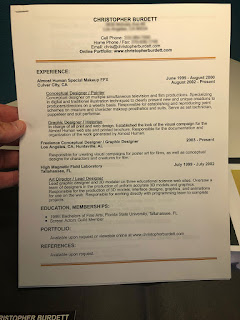 Page one of the resume. Nothing like trying to make a little seem like a WHOLE lot. In the beginning, you will do that. Need to make it look like there is more going on than there really is. 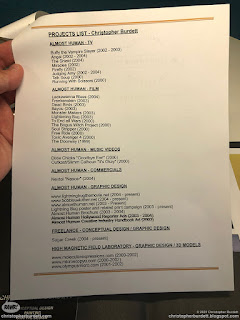 Page two of the resume. This is an accurate and uninflated list of the things I had worked on at this time in my life. While this information is still on my current resume, I sometimes think about removing or heavily condensing it. That day may come eventually.

As I have said above, this is a moment in time for me now. This is not an embarrassment or something to be ashamed of, this is who I was at that time. I think it is crucial to remember things like this. It shows that we do not know where we will end up or when it will happen. Do not lose faith in yourself. We never stop working and pushing ourselves, and you never know where you will find yourself.