Very excited to finally share this with work with you today. I have only been waiting 7 years for this piece to finally come out. With the announcement of the 2nd Edition release of Mansions of Madness I can now share the Star Spawn miniature design that I did back in 2009. While I have had to wait a while for pieces to finally come out, this by far is the reigning champ for the most delayed release. Better late then never! Here is the initial design for the Star Spawn... 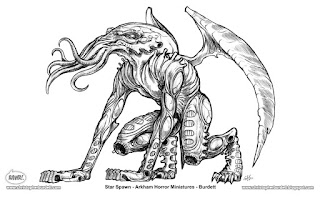 You can imagine my reaction when I looked into the display case at Gen Con during set up. I did a double take since it had been 7 years since I worked on this piece and it has been years since I actually looked at the drawing. I was told years ago when it was not released with the rest of the Arkham Horror miniatures that it would eventually be out as a part of "something special". Well, that day has come and the 2nd Edition release of Mansions of Madness must be pretty special! 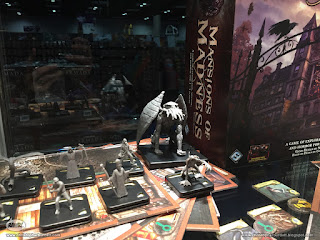 Here are two views of the complete turnaround for the Star Spawn. You might notice an edit to the texture of the legs that was requested after the final 3/4 view was created. The right wing in the rear view was a separate drawing that was digitally added for the turnaround. 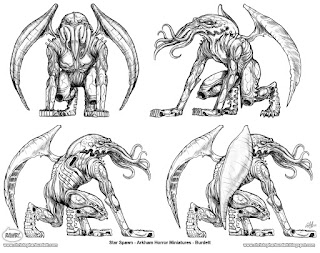 Since I am sharing everything, because why not it has bee 7 years, here is a look at the very rough scribbly thumbnails that I turned in for miniature concepts. This is the highly detailed and clear roughs that I use to turn in 7 years ago. Scribble scribble scribble... 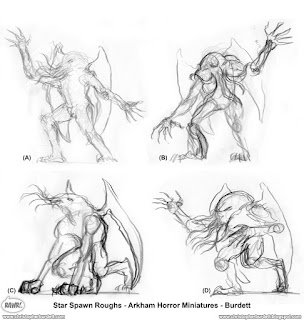 If the release of the Star Spawn in Mansions of Madness after a 7 year wait was not good enough, it looks like a fully painted version of the Star Spawn will be available later in the year! Looking forward to having this fellow on my shelf with the rest of my miniatures. RAWR! 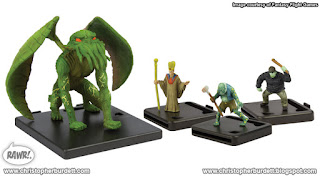 That is all for another exciting Monday on the blog, see you back here on Wednesday!  Until then...