Recently while doing some cleaning and organizing, I came across some card packs that I had completely forgotten about.  Not only were they forgotten, after a quick search, I realized I never shared them. These card packs have been tucked away for seven years, and now they are finally getting a little attention here on the blog. Way back in 2012, I worked on the Legend of the Five Rings expansion, Coils of Madness. One of the main pieces I produced for that set was the great mad dragon P'an Ku. The set was eventually released in 2013, and my P'an Ku art was heavily used on the card packaging as well as the card box. I feel like this may have been lost on me at the time because this is something that does not happen with my art with any frequency. Here is a look at the packaging for Coils of Madness. 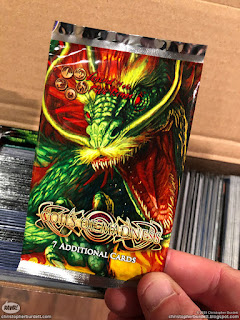 P'an Ku snapping at you from the front of the packs. 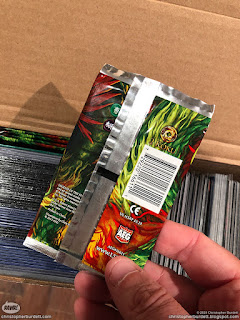 P'an Ku wraps around to the back. 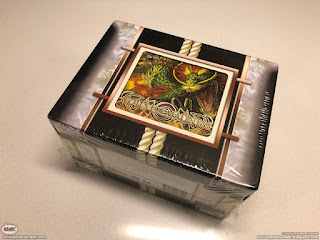 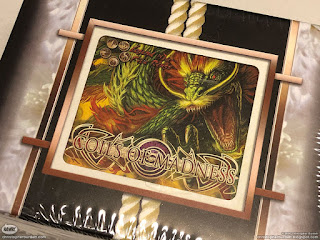 P'an Ku is the featured art on the top of the card box as well.
For an eight year old painting, I still really like this piece. Sure, there are things I would do differently now, but for card art, it still looks great, and I love I doubled down on yellow and made this piece so warm. I really thought this piece was going to be huge for me. I made a ton of prints and playmats of this image, and I just had a feeling this piece was going to sell really well for me. That is not how it ended up working out. When the playmats eventually sold out about five years ago, I never had them reprinted. The prints sold very slowly from the beginning, and I was finally rid of the last ones in February at Pensacon when the last one sold from my deep, deep discount bin. Not the fate I had envisioned for P'an Ku, but that is how it is sometimes. This piece seemed to tick all the boxes for a fan favorite, but the fans were never there. Goes to show that you can never honestly know what will be successful and what will not. Here is the final art for P'an Ku's Madness, as well as the card it appears on. 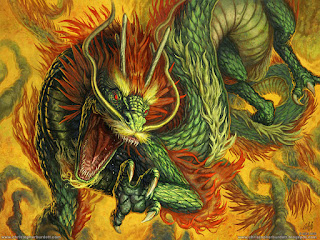 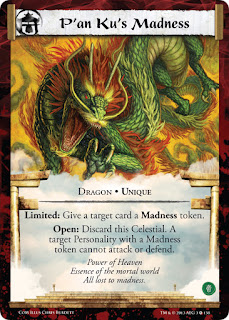 P’an Ku's Madness in handy card form.
That's all for another exciting Monday on the blog, see you back here on Wednesday! Until then...
For more samples of my work or to contact me regarding my availability head over to my website: www.christopherburdett.com
Posted by Christopher Burdett at 9:30 AM