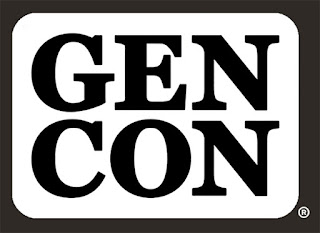 Yesterday it was announced that I am one of the three featured artists at this year's Gen Con, July 30-August 2! This will be my tenth Gen Con appearing as an artist, and it is truly an honor to be recognized this way and to share the title with two other amazing artists that I am lucky enough to call friends.

This is something I have had to keep quiet since the beginning of January, while at the same time arranging things like crazy behind the scenes. While I had planned since last year to have the Grand Bazaar of Ethra VanDalia printed and in hand for Gen Con, this annoucement meant they HAD to be at Gen Con. I have put all my attention and work towards my book, and without it, my presence at Gen Con would be somewhat diminished. So while this was and continues to be exciting news and a great honor, there has been a little bit os stress getting everything arranged and moving to make sure Gen Con and the Grand Bazaar all happen when they need to and how they need to. Exciting times, to say the least! 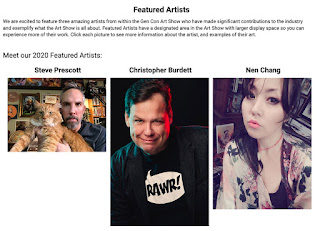 Steve, and idiot, and Nen walk into a gaming convention...

As both Nen and Steve have already agreed on Facebook, we aim to misbehave at Gen Con! We all have a lot of fun at conventions and Gen Con, in particular, so we hope to take part in some shenanigans and try to be somewhat professional... 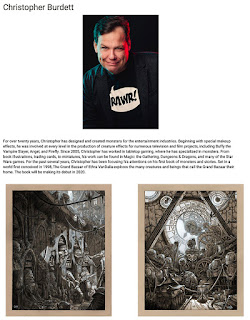 There is a bio up on the Gen Con site featuring my exploits and samples of my work. THere will be a more involved interview coming to the Gen Con blog later in the month. I will be sure to share it here when it posts.

And lest you forget, The Grand Bazaar of Ethra VanDalia Kickstarter is nearly done with its first week, and it has been an exciting week, to say the least! Head on over to check out all that is going on!


For more samples of my work or to contact me regarding my availability head over to my website: www.christopherburdett.com
Posted by Christopher Burdett at 10:01 AM