On Monday I shared with you some memories of working with Zoe Robinson at Fantasy Flight Games. In that post I mentioned that the first piece I ever did for her was a Basilisk for the Talisman expansion, Frostmarch. That piece is seven years old and very very flawed to my eyes. After reflecting on Zoe's time at FFG and all that we worked on I decided to revisit that critter and give it another pass in pencil to see what it would look like now. Of all the pieces I did with Zoe, the Basilisk is the only one that really makes me cringe. Here is my fresh pass at the Basilisk... 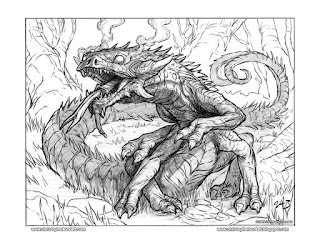 I am sure you are thinking to yourself, why on earth am I showing you the redesign before I showed you the original... BECAUSE I don't want seven year old work as the thumbnail for this post. Okay, now that you have seen the rework, lets travel back in time to 2009 and look at the original drawings that I submitted for the Basilisk...

These were all that I submitted for the Basilisk. These were the thumbnails and the final drawings all in one. Because I had not developed my now ubiquitous process for making art that use for everything today. I got a couple sheets of paper and just scribbled on them. The bounding box I drew on the paper to do these in was not even the right dimension for the final piece... I had to add some more drawing digitally after I scanned the scribbles into the computer. Now THAT is professionalism! AND somehow I continued to get work in the gaming industry.

By the way, I have never shared these three Basilisk scribbles before. These drawings most likely have only been seen by three or four people before now. Not that you all were missing anything. As you can clearly see, option 'A' was the winner. Isn't option 'C' just the cutest widdle Basilisk EVAR! Let us have a look at 2009 and 2016 side by side to see what has changed...

I continue to mention all the flaws with this piece. Here is a real quick run down of everything I did wrong with the fundamentals of the drawing and we will forgo this issues with the painting. In no particular order: anatomy of the head is all kinds of wrong, the  eyes, teeth, mouth, tongue, horns all do not line up in perspective or have any cohesive or realistic symmetrical order, that head is super wrong, one more time - HEAD = WRONG, arms are uniform and boring, arms don't seem to connect to the body and appear to be just slapped on the sides, and finally... THAT HEAD. The painting did not remedy any of the major issues and seemed to add some more, but that is for another day. Here is how the final painting turned out for the Basilisk... 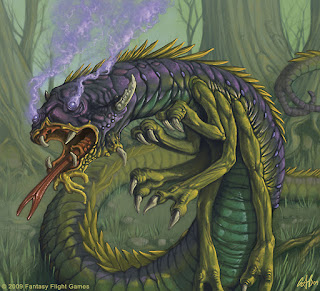 Pay $100 for an illustration, get a $100 illustration. I won't even go into how much blood, sweat, and tears I pumped into this to get a finished painting. I worked SOOOO much on this, because at the time I was learning and ever piece was a fight to finish. I did learn a lot, and in a way that is what is important. Fun fact, for a brief time this piece was in my portfolio that I showed to clients. THE HORROR! THE HORROR! Thankfully the Talisman cards are SUPER TINY and once this piece was shrunk down it masked many of the flaws. Maybe. Here is the final card... 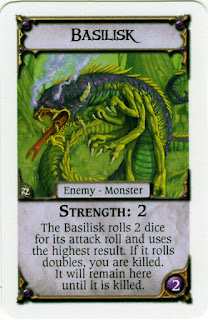 Basilisk in handy dandy card form!
Print it SMALL and make all the mistakes got away.

Seven years, at times it feels like so much more and so much less all at the same time. Just glad to see that my skill set has improved over the years! The last thing we needs is more cards being made like this original Basilisk.

That is all for another exciting Wednesday on the blog, see you back here on Friday! Until then...